Jill, Carole Matthews and me

January kicked off with a BANG. New Romantics Press put on their best bibs and tuckers and headed to Lunnon Tah-an for Jill Mansell’s Book launch. There we bumped into many fellow RNA members who’d wandered over from another book launch to join us. A great time was had by all and we went away inspired to finish our WIP in 2016.

In February, our baby boy Jasper was 20 and he received lots of cards. One from a Facebook friend and reader Lotte Sutton in Australia, which was such a kind thought.  I just hope he appreciated it. He’s 21 on February 2nd 2017 – I predict that there might be a little celebration on that day involving the Bridget Jones DVD, cocktails, canapes, cake and coffee. All the things he likes (cough, cough).

card made by crazy owner 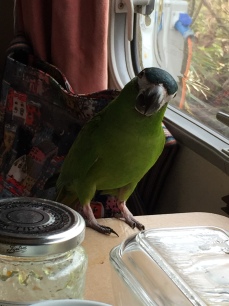 the bad boy himself

Adrienne and I have both had parents who’ve died from cancer, so we decided to raise some money for HOPE AGAINST CANCER, in their memories. In February we organised a literary lunch at swish Kilworth House Hotel, gave a hilarious (if I say so myself) talk about writing romance – and raised over £500 for the charity. 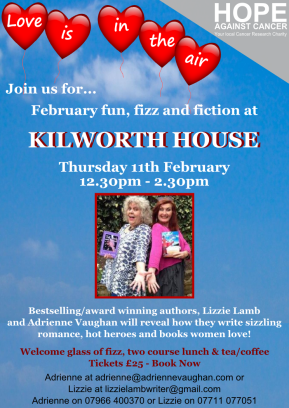 I also gave a talk on self-publishing to the Birmingham Chapter of the RNA, and to students at De Montfort University during February. March was a busy month, too. Apart from it being my birthday, I made the final of the Exeter Novel Prize with Scotch on the Rocks so we took the caravan down to Exeter and fitted in a spring-break holiday after the ceremony. I took good care of my precious trophy, but a certain person thought the award belonged to him! 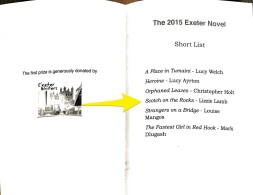 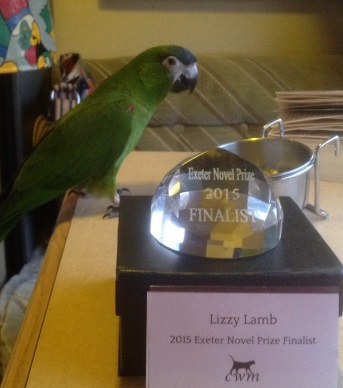 April was rather more family orientated as it was my father-in-law Geoffrey’s 90th birthday which we celebrated in style. A moment to cherish. A friend of long-standing, Maggie, who regularly buys several paperback copies of my novels and POSTS them to Australia (at great expense) joined us for the celebrations.

I got stuck in with the WIP and vowed to finish it before Christmas.

May was a busy month with the fabulous Romance in the Court which Adrienne and I attended. Passing through St Pancras I bought something in Aspinall’s and, after talking to the manager, we were invited back to hold an author event there in November.More of which in part #2. I’m looking forward to attending the same event in May of 2017, thanks to Goldsboro Books and David Hedley.

a view of one half of Cecil Court 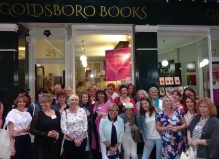 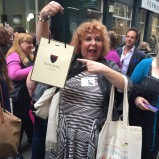 Next, I gave a talk in Chippenham, to aspiring authors to prove to them that self publishing was within their grasp and took along novels which New Romantics Press have published to make my point. Where there’s a will, there’s a way. 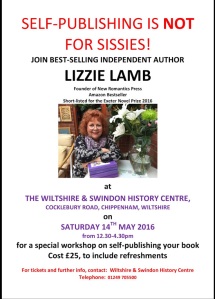 What we didn’t plan on last year, was trading in our caravan for a slightly bigger one with a FIXED BED. But that’s what we did, two days before we set off on our month’s stay in Bonnie Scotland . . . No more setting up/dismantling the bed every morning so we can have breakfast. I’ve also gained more writing space, so #winwin. Just writing about it makes me long to go on the road again. 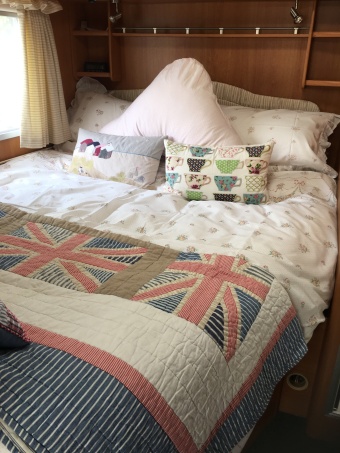 I hope you’ve enjoyed reading about the first half of 2106.