From One Heilan’ Lassie to Another !

Today I’m welcoming author Rosemary Gemmell onto my blog, close on the heels of Gwent Kirkwood, another Scottish writer I featured. Are you detecting a theme, yet?

Thank you so much, Lizzie, for inviting me to your lovely blog. I enjoy reading about your travels around Scotland now and then!

The setting in any novel is often one of the most important aspects of the story, for the author and the reader. This has never been truer than it is for The Highland Lass, my Scottish dual-timeline novel, as it is mainly set around my own hometown in the west coast of Scotland, an area of natural beauty, rich with history.

The old Greenock cemetery’s ancient and elaborate gravestones, winding paths and overhanging trees provided much scope for my childish imagination. This was where my mother first introduced me to the gravestone of Highland Mary, who was a brief but important love interest of Robert Burns, our national poet. This early memory and a fascination for Mary Campbell was the inspiration for the short historical chapters in The Highland Lass.

Inverclyde enjoys an envious position right beside the River Clyde, and across from Gourock sits the small seaside town of Dunoon in Argyll. From my side of the river, we can see the entrance to the Holy Loch, bordered by the towering Argyll hills, where the American Navy was based from the 1960s until the early 80s. This provided another thread in the story, as Eilidh is seeking the identity of her father, who may have been an American officer. Dunoon is also where Highland Mary was born, where her statue forever looks across the Clyde.

I hope you don’t mind me sharing slipping in a couple of my photos of the Clyde and Dunoon, Rosemary, including this video of us sailing Doon the Watter to Dunoon aboard a CalMac ferry.  We were on the lookout for submarines, but didn’t spot any. 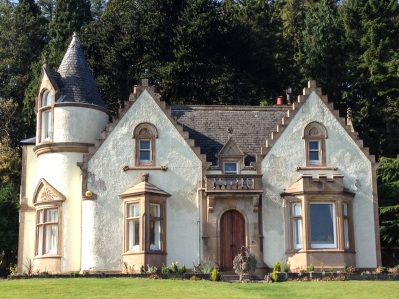 The memorial on Holy Loch at Hunter’s Quay

After researching Burns, from a book published in 1838, to more modern accounts and Burns’ own poems, songs and letters, I formed a real feeling for Highland Mary and her effect on the poet. I had an article published about the couple in The Highlander Magazine in the USA some years before but I kept coming back to the idea for a novel. So I carried out further research in the Gothic-style Watt Library in Greenock, with its access to microfilm copies of the old Greenock Advertiser and the later Greenock Telegraph, where I found several interesting facts that I incorporated into the story and the epilogue of The Highland Lass. The Greenock Burns Club (the Mother Club) kindly allowed me to sift through their archives fo 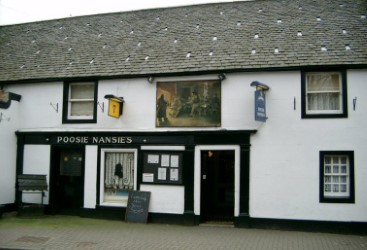 r any relevant material I may have missed.

The other main setting for this novel, in the present and past, is Ayrshire, known as Burns country. Highland Mary and Robert Burns met and plighted their troth there in the 18th century and the small villages have hardly changed at all. The inn where Burns and his cronies met, Poosie Nancie’s, is still in the same street in Mauchline. When I stepped inside the snug, low-beamed room, it took no imagination at all to picture the poet sitting at the table near the fire range with his ale. Ayrshire is also where the blossoming relationship between modern heroine, Eilidh Campbell, and handsome Scot, Lewis Grant, takes a major step forward.

Another inspiration for my Scottish novels is our famous Loch Lomond, one of the largest freshwater lochs (or lakes) in Britain, now part of the Loch Lomond and Trossachs National Park. One of my favourite places is the fairy-tale village of Luss, where Lewis takes Eilidh one day. The tiny cottages with their abundance of flowers in summer months line both sides of the narrow main street which wanders right down to the edges of the loch. 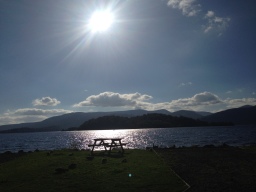 In my most recent romantic suspense novel, Return to Kilcraig, I feature two different areas of Loch Lomond. One is at Conic Hill through which runs the Highland Boundary Fault that separates the highlands from the lowlands. This is also part of the famous West Highland Way. The other area in this novel is known as Loch Lomond Shores, with its aquarium, shops and water sports right by the loch side.

But it is around my own Inverclyde where all the story threads in The Highland Lass come together and where Eilidh finds the answers to her past. In Return to Kilcraig, the contemporary village setting of Ross and Christy’s story is a fictional blend of several country villages around this part of the west of Scotland.

Many of the large cruise ships now visit the port at Greenock but you can still watch out for the oldest sea-going passenger-carrying paddle steamer in the world, The Waverley, which sails down the Clyde during the summer months and maintains our links to the steamers of the past. Scotland is so rich in history, myth and legend that I look forward to setting another novel somewhere along its shores.

More about Rosemary Gemmell –  A prize-winning writer, Rosemary Gemmell’s short stories, articles, and poems have been published in UK magazines, in the US, and online. She is now a historical and contemporary novelist. She has also published historical novels and contemporary novellas with a touch of mythological fantasy as Romy and two tweens books as Ros. Rosemary has a post-graduate MA in Literature and history and is a member of the Society of Authors, Romantic Novelists’ Association and the Scottish Association of Writers. She loves to dance!

Eilidh Campbell returns to her Scottish roots from America with one main aim: to discover the identity of the father she never knew. But her mother’s past in Inverclyde is a mystery with family secrets, a book of Robert Burns’ poems with a hidden letter and a photograph link to the Holy Loch at Dunoon when the American Navy were in residence. Staying with her childhood friend, Kirsty, while searching for answers, Eilidh begins to fall in love with handsome Scot Lewis Grant, but just how free is he? Together they trace the story of Highland Mary and Robert Burns, with its echoes to her mother’s story. In short alternate chapters, Highland Mary tells her own story from 1785-6. From Dunoon, to Ayrshire and culminating in Greenock, Eilidh finds the past is closer than she realises.

The legacy of her beloved grandmother’s cottage in the Scottish village of Kilcraig seems like the ideal solution after Christy Morrison’s recent trauma. Until the threats begin. Can she trust her heart and allow herself to fall in love again? When Ross McKinley reluctantly welcomes Christy back to the village, he has hardened his heart against love, until they begin to renew their childhood friendship. But someone is determined Christy should go back to London. Will they find the culprit in time?