North Coast 500 is the UK’s answer to Route 66 and I am proud to say that we have covered every mile of it – with one exception. More of which later. If you decide to make this journey, you will find these two books and map invaluable. The books make great armchair reading when you’re planning your route and Charles Tait knows his subject well. 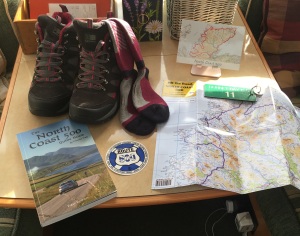 These boots are made for walking ……

Our adventure started in Jamie’s Italian, Edinburgh where we met up with four friends to celebrate my husband Dave’s 66th birthday. Who could fail to fall in love with Auld Reekie? Although we have visited many times, it never fails to enchant and amaze. 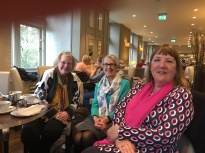 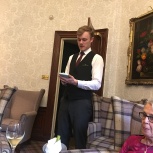 we thought our waiter looked like a young Sam Heugan

To get ourselves into the mood, we toured the city via open-top bus and, on a separate day, visited the Jacobite exhibition at the National Museum.

There we saw (shudder) the chopping block where Lord Lovat met his end on Tower Hill. That sent us on another quest, to track down the mausoleum where, allegedly, his remains were laid to rest by his family. As luck would have it, Dan Snow, the TV historian was also on Lord Lovat’s trail; here’s a wee snippet of the programme he will eventually produce. In the fictional Outlander series on TV, Lord Lovat is the hero Jamie Fraser’s grandfather.

While in Edinburgh, I met up with Nick Fiddes, owner of Clan.com. Nick, and his co-director Adele, allow me to use photographs from this site for the front cover of my books.

Leaving Edinburgh we crossed the newly opened Queensferry Crossing and I managed to get a shot of all three bridges. Not easy from a moving camper van!

Then we were on our way to Inverness with a stopover at Blair Atholl, where a piper

(video link) greeted us on the steps of the castle, a fitting start to our tour of the highlands.  The Duke lives in South Africa, but Dave  stood in for him on this occasion.

Unable to resist some retail therapy I spend some time at the nearby House of Bruar . The heroine of Girl in the Castle is Dr Henriette Bruar, so a pilgrimage made sense. Well, that’s my excuse, anyhoo.

At Inverness we camped at the Caravan and Motorhome’s site at Culloden. We’d visited the battlefield on two previous occasions and decided to give it a miss this time. If you’ve never visited the site, make a detour and take your tissues with you, it’s an incredibly atmospheric place, haunted by ghosts. If you’re a fan of Outlander, it’s a must. I had my fingers crossed that Outlander #3 was downloading onto Amazon Prime in our absence. 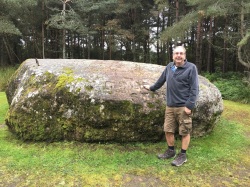 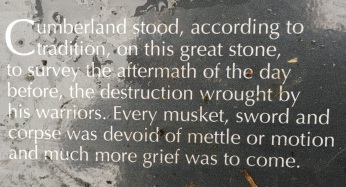 This time, we satisfied ourselves with a photograph of the Prisoners’ Stone as our objective was Chanonry Point on the Black Isle (photo below with rainbow) to watch  the dolphins chasing salmon up the Moray Firth when the tide turns.  You can just see the dorsal fin of a dolphin in the photo on the right. I don’t know why, but seeing dolphins in the wild – not jumping through hoops as part of a show, affected me almost as much as visiting Culloden.  Anyone would think I was a writer for goodness sake. 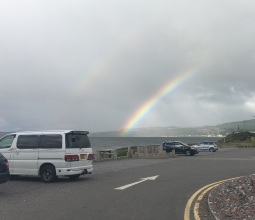 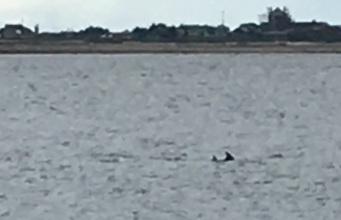 Check out this website for when to see the dolphins, They can also be spotted across the firth at Fort George – well worth a visit on its own account, as is Inverness which has great shops, museums and cafes.

We planned to spend all of September touring Scotland and although we were hardly ‘roughing it’, standards had to be maintained at all times (cough cough). I started off trying to dry our clothes in the caravan, then bought a portable washing line. 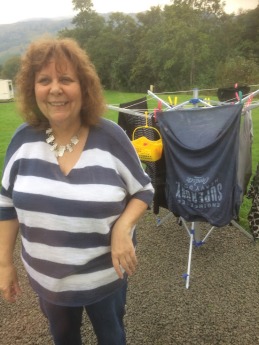 More importantly. I also brought a variety of outdoor wear with us to cope with changes in the weather . . . including boots, gloves, long mac (previously used for playground duty!) and sunglasses – it didn’t rain all of the time.

Turning our backs on Inverness we headed for Brora and the north east of Scotland.

If you’ve enjoyed reading this blog post, check out my Scottish-themed novels

Blogger and author Sharon Booth has written a moving and comprehensive review of Girl in the Castle which totally captures the mood of the novel. Thanks, Sharon. 💟

My books had been working so hard to sell and promote themselves that I felt they needed a holiday. Where to go? Why – Bonnie Scotland – where else? After upgrading our caravan to one with a fixed bed, we set off for in June to tour Scotland, writing and finding inspiration for my next novel(s). Here are some interior shots of caravan #3 – no more making and unmaking the bed every morning before we could have breakfast. 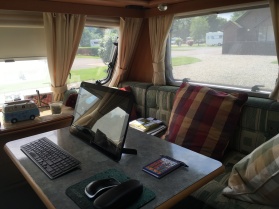 Did I mention that the parrot came, too? Here he is, surveying his wide domain (thru the rain) and telling anyone who walked past us that they SHOULDN’T COME TOO CLOSE – this is Jasper’s house.

We camped at Davidson’s Mains just outside Edinburgh and took the shuttle bus into Auld Reekie. I wanted to take a literary /historical tour of the city and notable writers and characters associated with it – Walter Scott, Ian Rankin, JK Rowling, Grey Friar’s Bobby . Sadly, the Elephant House was too busy and we couldn’t get in or add to the graffiti in the toilets (permitted) – next time maybe. 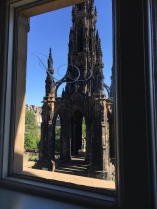 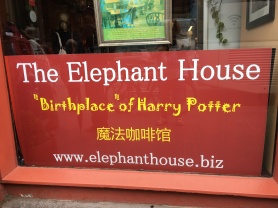 The Elephant House where JK Rowling wrote much of Harry Potter 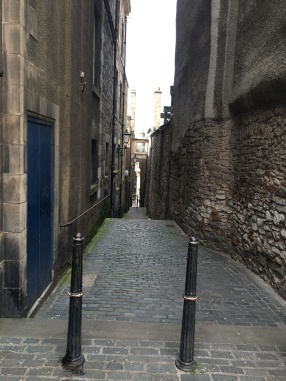 An Edinburgh ‘Close’ just off the Royal Mile – couldn’t you just imagine Inspector Rebus looking for clues to a murder in its narrow confines?

We spent quite some time exploring Greyfriars churchyard and stood on the spot where the Covenant was signed in 1638 as a protest against the rule of bishops. It’s a part of history which has largely been forgotten, however, you could easily spend half a morning looking round the church and the exhibition and absorbing the incredible atmosphere.

As you can see, the history of this incredible churchyard stretches back into the 16th century

Next, we walked the Royal Mile to a Clarinda’s Tearooms, (bit of a theme developing here!) a cafe recommended by Facebook friends/readers. Clarinda is buried in the nearby Canon Gate cemetery and is alleged to be the lover referred to in Burns’ Aye Fond Kiss.

One of the next sites we visited (oh, our aching feet) was the Mercat Cross on the Royal Mile. It is said that while the artillery was being prepared before the Battle of Flodden (1513), a demon called Plotcock read out the names of those who would be killed. Edinburgh is such an ancient city, it’s hard NOT to believe such stories when you’re there. 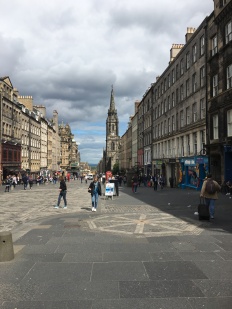 My ‘snap’ of the St Giles Mercat Cross didn’t show up very well, but this one is close by

And finally – what of my books? Well, lovely author friend Helen Barrell (check out her debut novel via this link) went to Edinburgh earlier this year and took a copy of Tall, Dark and Kilted with her. Here are some of HER pics. If you’ve enjoyed following my adventures (with novels and parrot) watch out for Bloggy McBlogface #2 when I tell you all about touring the Royal Yacht Britannia and our visit to Rosslyn Chapel (the Da Vinci Code). 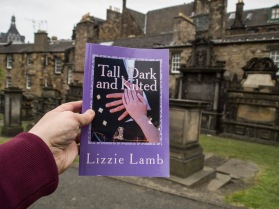 The cultural home of TDK