← How to self-publish your novel – a workshop is announced
Tall, Dark and Kilted by Lizzie Lamb @lizzie_lamb #Romance in the Scottish Highlands #bookreview #SundayBlogShare →

One of the great things about living in Leicester – apart from The Foxes winning the Championship League, and finding The King in the Carpark (Richard III), is being on the main line to London.

Yesterday, fellow New Romantic – Adrienne Vaughan – travelled with me to London for the best event of the summer, so far. For a mere £5 we bought a ticket to Romance in the Court, a fabulous event organised by David Headley’s Goldsboro Books.

The event was held in historic Cecil Court on a beautiful summer’s evening.

There, amidst a fabulous gathering of romance writers, readers and supporters, I met old friends, made new ones and got down to the all important business of networking. As a writer, I’m never sure if the time I spend away from the WIP is really productive, so it was reassuring to meet new readers who said they knew me from a variety of social media: Twitter/Facebook/Instagram. And, as a result of ‘getting my name out there’, one reader had downloaded all my books. RESULT!

However, before I upload more photos, let me digress and share our bit of good fortune with you. En route to the event, I popped into Aspinalls in St Pancras (as a girl does) to buy the Swarovski ‘bag hook’ I’d been promising myself as a reward for working hard on #4. In a scene reminiscent from Love Actually , the manager  wrapped my present in an four different types of gift wrapping. He also put four boiled sweets in the bag. I know, I know it should have been a cinnamon stick, but I’m not complaining for the best was yet to come!

He asked us what we were doing in London. Quick as a flash we handed him our business cards. Mightily impressed, he asked if we would come down to his store in the autumn to an author event which he would organise: prosecco, nibbles, book signing etc. He also mentioned that he liked to’ take care of his girls’, which made Adrienne think (optimistically) that she would be getting a set of matching Aspinall luggage.  A girl can dream, can’t she? So, before we get ahead of ourselves,here are the rest of the photos.

And there’s more. Click on each photo to see who’s who !

And, finally, a great photo of David Headley with Carole Matthews (courtesy of Carole and Kev). Many thanks to them for allowing me to use one of Kev’s photos at the top of this blog. 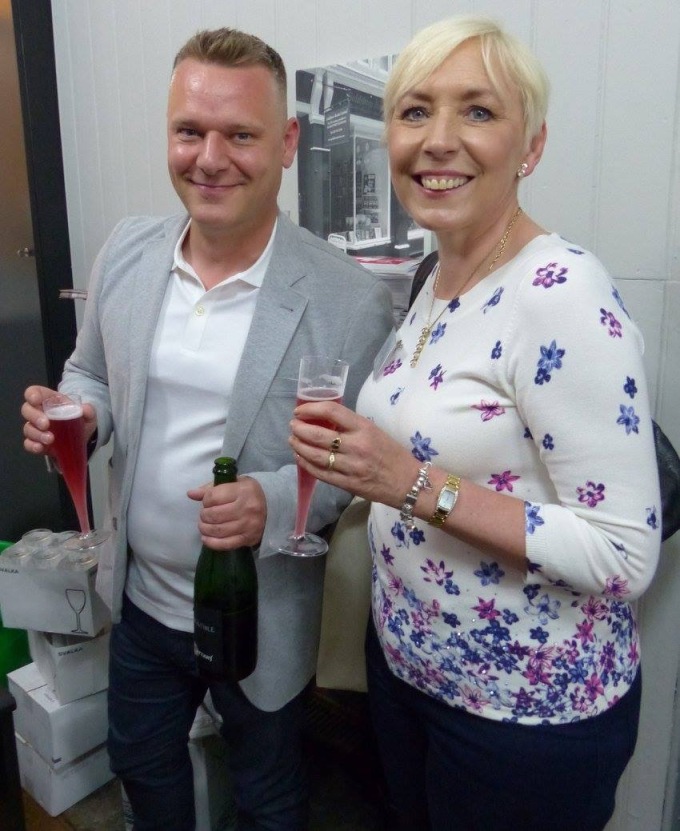 As you can see, a fabulous time was had by all. The best five pounds I’ve ever spent. I’m hoping that David will host a similar event next summer . . . no pressure, obvs.

And, just before I sign off, keep your eyes peeled for an exciting announcement coming from New Romantics Press this summer. But, hush, hush, it’s top secret  . . . for now!

← How to self-publish your novel – a workshop is announced
Tall, Dark and Kilted by Lizzie Lamb @lizzie_lamb #Romance in the Scottish Highlands #bookreview #SundayBlogShare →